Damn it was very good, I liked so much :D

Loved the game but i didn't have the patience to go through when it became a stock market simulator.

I thought that too, after 15-20 minutes the Stock market simulator accelerates much faster (especially once I realized I could press Q W E R to activate abilities)

i know this game won't have a sequel due to its nature and all that, but i can hope

overall very good and polished and gets the point across, though the stockmarket part was the most tedious and lengthy and took a little while to figure

It's a cute way to tell the message that capitalism will destroy the planet, but as someone who already knew that it was just kind of tedious.

Spent 15 years getting over depression to have it all come back with one video game.

jk but seriously well done. You folks perfectly captured the awful scenario we are all in. That was rough.

I have a more hopeful outlook but hay, if we don't succeed life will uh, find a way.

This game's story is the equivalent of a barney's show episode x 2, reloaded, and unsupervised, with how obvious and in your face it gets. There is a fine line with cartoonish logic and complete garbage writing, and this game far crosses the line. I don't have a problem with the political messages included (There are some good points in there), but they're presented in a complete garbage way, and its just gets really absurd; The topics being dumbed down to a point of: this idea good because my people good, this idea bad because those people evil and care only for themselves. The characters that represent the ideas that the authors show in this game are presented in a way for you to hate those who the author criticizes, and funny enough the characters your supposed to agree with are kind of annoying too. I thought it was only a part of the "cartoony logic" of the writing, but its just bad writing.

Finally props to the game with how good the art is, really cute and charismatic; the gameplay, simple yet does the job, and the music which is quite relaxing and suiting for the story, I would buy the soundtrack if I could :P ; It even goes on a rhythm that the game follows in the 3th act of the game, with how the stocks seem to change to the beat.

This game has potential if they could rewrite the way the interactions happen, don't throw subtly out of the window this time and it could totally work.

A short anti-imperialist masterpiece. Loved it.

this game is one of the best games i have played in a long time. Its short, but not 5 minutes. Its touching, but not too touching. I had so much fun playing this. 11/10

Little touch I really liked: the way the stock market ticks are synced to the music!

This game was absolutely adorable and fun! Not to mention it had a very important message to show :) 10/10 for sure

this is probably my favorite game ever

just maybe make it a little more obvious that you can 1. use the abillitys 2. buy for little sell for more and 3. you can just click to make the texts go faster

I'm not even done with it yet and it's lit-

I love the easter eggs haha

This games music is fire

Wow this was very very good.

Also, the little raccoon emojis were so freaking cute.

Absolutely adore this game. Will have to replay it soon. Didn't think I'd be in tears over this game but here I am! /pos

I loved this game but I kept getting missing images and I got this error sometimes:

This site can’t be reached

I really enjoyed this game I really liked such an amazing game that this developer team has come up with I am looking forwards to this Dev team's future project, honestly just great 10/10

That's the vibe I got from this game too.

I enjoyed it and it was interesting to find that this game had an actual narrative and a very.. *questionable* one. It seems the game is trying to force it's ideas and regimes, it might be a stretch obviously but kind of like a mild/subtle brainwashing. The game is quite clearly idealizing communism/socialism/idealism which in their own right are all not really the best, while trying to completely disregard religion/capitalism which, I should say, are also not the best in regards to political theory. This is shown through the characters, MB being the obvious "villain" (capitalism),
Dirt being portrayed as a strange religion obsessed weirdo (religion, obviously lol), Doc, Teach and the Otaku girl (forgot her name) being the first three theories mentioned (of course some representing each individual more or less than others). TK is seemingly dragged into this strange situation out of the blue and Teach and the otaku chick seem to believe he's bad for apparently not realizing MB was corrupt (also can I just say there was absolutely no reason for Teach to be as much as a dick to TK as he was, he did absolutely nothing to him). The game wants you to side with Teach and the otaku for the sole reason that they are angry at him. The only "good" character in this game is doc (and arguably Dirt, although there are rarely chats with him), he's the only one genuinely trying to help while taking *almost* everything into consideration as should the smart, glasses. big word speaking trope characters do, while Teach and the otaku yell at him and MB sits back, I do have to say though, you portrayed MB's personification very nicely through his character, albeit, very straight forward and obvious (maybe cartoonish exaggeration? this is a game after all). I could go on about so much more, this game made me think quite a bit, but I feel I've typed too much already, no one is gonna read all the way to here, but I feel that I've covered the narrative side of the game for the most part, the gameplay is just your cookie cutter idle stuff.

All in all, the game is fine, with a nice little twist on this genre. I do wish the game wasn't so blatantly biased and centric though.

Don't worry, I'm sure people, much as myself, have taken the time to read your comment.

But when you click on and play a game with the sub-title 'An anti-capitalist clicker for all ages' you should at least expect whatever you find inside.

People can and will express their opinions through their chosen medium, this being games, painting, writing or whatever else! You can disagree of course, but to call a work that's very honest and straight-forward with its messaging brainwashing is quite a stretch.

Good to hear you still had fun with it though, I enjoyed it a lot as well.

I did expect an anti-capitalist piece of media but what I didn't expect was glorification of other, arguably less ethical political theories. I don't exactly disagree, as I take no stance, but I didn't want it shoved in my face so blatantly, that's the point I was trying to make.  I do think that the brainwashing bit was a stretch as well, I mentioned that in the original post, it was just my brain going a bit wild with the idea. Something that I read from another user, "Flogger" was that the "sorry for colonizers" was unnecessary, it just felt random and like a way to have others who the think the same way say something "deep" about the game. Of course, in the end, none of this matters, my rating was just a critique, nothing more, nothing less, I'm glad you and everyone else who enjoyed it just as much as I did and I am also thankful you replied respectfully, I expected to have preteen alt tiktok girls with kuromi profile pictures to spam me to tell me how I was wrong because everyone should have anything they want.

Still take issue with your idea of glorification, but it's probably not worth getting into. My guess is that preteen alt TikTok girls with Kuromi profile pictures don't really browse itch that often, but I could be wrong. Maybe the tidal wave is fast approaching, like the calm before a storm or the sea pulling back before a tsunami hits. If that's the case good luck and have fun!

my guy nobody is saying everyone should have a mansion

we're saying it's nonsensical that we aren't providing basic needs for all of society, which we can do, easily, for the sum benefit of 'we're burning the world faster'.

It's surprising the amount of down votes this post got, people did not seem to like you because you don't agree with certain politics :P; But anyways, I don't really care about the politic stuff that much, but i agree with you with how obviously it wants you to dislike or like certain characters, feels like a bit of lazy writing. Apart from that the game was decent.

What a cool experience this was. The writing is super funny, I was invested the whole time, and act 4 actually scared me lol. My trash is some awesome trash!!

really great but jesus the ending got sad quick

This game had no business being this funny (get it? business haha)

This is a pretty good game!

One of the best clicker games that exist. Every thing with it is great. I love the progression of the game, the art style is very cute and the music is neat. I can't say that there are any negatives. And hell the game is free so go play it

I give a 10 for the music, it makes the story and gameplay better, I would get the soundtrack if this game had one.

Characters are very well made with their characteristics, personality, hobbies/interests. it makes them feel more, ALIVE than some other games I've played.

I hope this game grows more and (maybe?) gets a sequel, you have made me feel multiple emotions at once, very well done.

Not for the feint of heart. Hits way harder than I was prepared for when I started it. Don't know if I'll sleep tonight.

Awesome but game stuck when I ask something to money baby academy(4,5 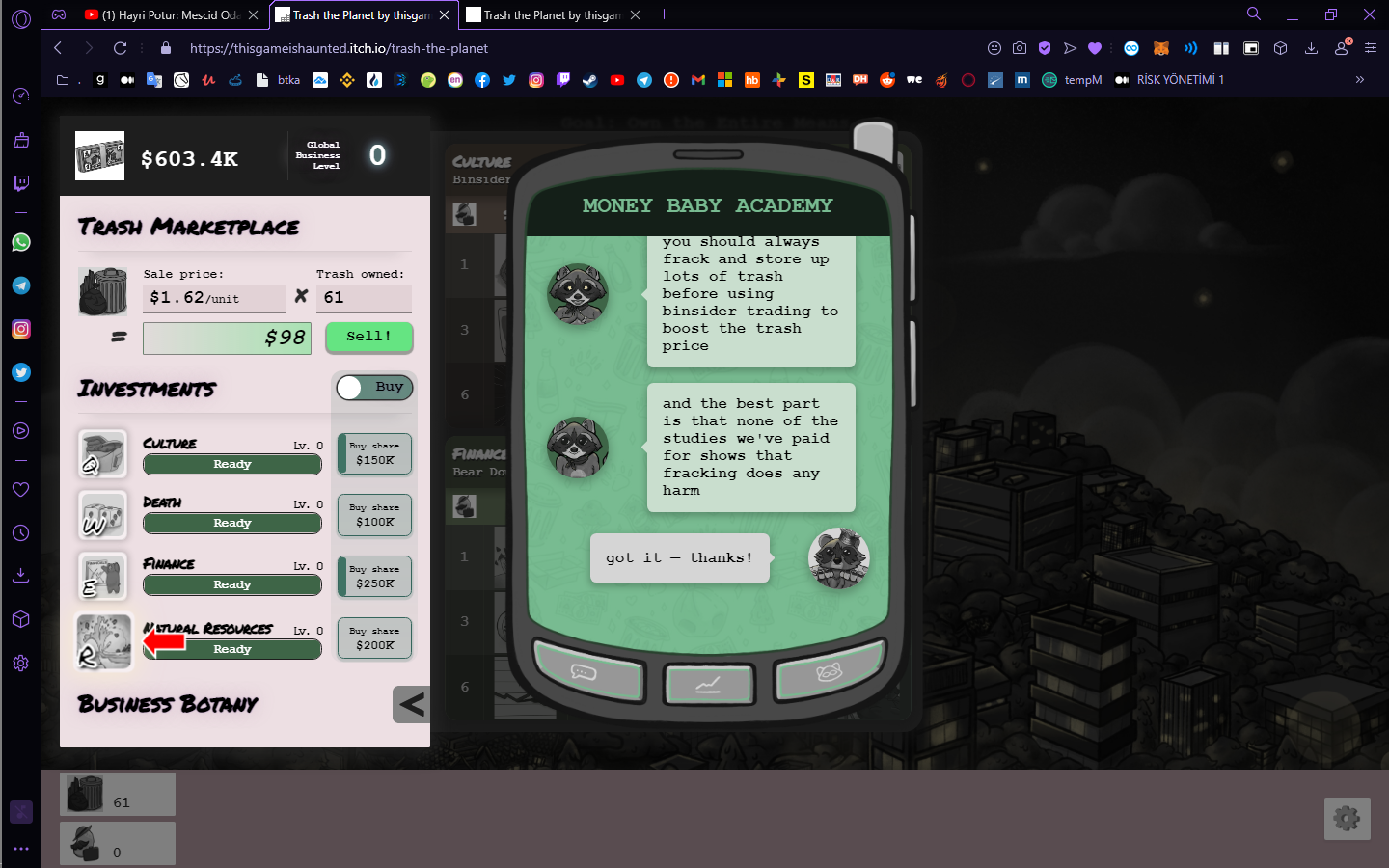 This looks lovely! Any chance of there being a downloadable version for prosperity...?

Game just ain't worth it with the current problems, despite the high apparent quality. Ruins the core satisfaction.

yes the loss of focus is quite frustrating, especially since this is an idle game, but everything else is fine and you can change the text speed in the settings, it is also where you can save your progress

Great stuff! Did a full playthrough: