Trash the Planet is a resource-management game that subverts clicker mechanics to serve its narrative rather than manipulate the player.

You play as a group of raccoons who start out collecting trash and end up ruling the planet. Help raccoon society evolve at an alarming rate, marvel as the numbers get bigger, and learn how to manipulate the stock market with absolutely no consequences.

For the best experience, we recommend using Firefox or Chrome. The game may run in other browsers, but be warned: it might get weird.

You'll primarily use a mouse here, but we've baked in some keyboard controls as well. Hold option or ctrl to see hotkeys.

Press Tab to open or close the options screen. This also pauses the game.

In addition to manual saves, Trash the Planet includes an auto-save feature. Feel free to close your browser and come back later, and you'll be able to pick up right where you left off.

Trash the Planet was made by This Game Is Haunted, who are:

On behalf of our tiny team, thank you for playing Trash the Planet!  If you'd like to say thanks and help us out, please consider rating our game, following us on itch, or saying hi on our Twitter or Instagram accounts.

If you like the music, please support our composer Bryan by buying the soundtrack on Bandcamp.

This version of the game is totally free, but thanks to everyone who has requested to donate. We're a small team, so we'll fix bugs as we see them and have time. We're not going to offer the option to download the game at the moment, but it's something we might consider in the future.

<3,
This Game Is Haunted

absolutely adore this game and come back to it every so often! resource-management games aren't usually my type of game, but i truly enjoy this every time i come back to it! i am sending forehead kisses to each of the developers for creating this joyful experience

game is absolutely brilliant, one of my favorites in the last couple years, I recommend it all the time. Really funny, really fun to play with great mechanics, and a totally politically relevant plot that expands beyond what you expect. It's just overall a really great metaphor for the shit we're living in now and how some simple unplanned choices can lead to absolute destruction.

this game is really well-made! resource-management type games aren't usually my thing but i enjoy this one because of the graphics and storyline; it doesn't necessarily feel like a bunch of confusing numbers. i liked the overall message of the game, too.

I really liked this game. I played it a while back and spent a good bit of time looking for it online so I could play it again. Luckily I rediscovered it by searching Reddit.

I was thrilled to play it again. The art style is unique but still feels classic. The game play is engaging and the dialog witty and charming. I appreciate the effort and thought put into it and really enjoyed how the story progressed. Was not expecting the game play to change like it did through the game, but it made it even more difficult to put down. Fantastic use of style, storytelling and game play. Thank you for making this!

I really liked the concept of the game. Big fan of A Dark Room.

The dialogue though really drags. I think there is a lot of good stuff going on, but the conversations, especially the texting could be made significantly more succinct and to the point. Also forced cutscenes had the annoying popup-ness to them. The ending conversations dragged on as well for me, but probably partially because I opted to skip a lot of the dialogue towards the middle of the game.

The very end and  beginning probably had the best snippets, since they were  more to the point and didn't interrupt the gameplay.

As a side note, I use an ultrawide monitor, which when in fullscreen or maximized, meant there was a lot of dead space in the middle of the screen.

Gameplay-wise, it was pretty good. The stock buying/selling portion could have been better balanced to have fewer pauses in gameplay, especially since it was geared more towards active play and strategy. It actually took me a bit before I realized I had to be more active precisely because of the long gaps where there were no actions I could take.

Dude. I loved this so much. Great game. Left it running overnight and just had fun with it for a while.

I appreciate the overall anticapitalist message, but have a few critiques:

2) The complete inability to reverse course or affect anything even if you actively try feels bleak and overly cynical.

3) Conversely, the idea that we can recover from massive global warming and climate change even if we do nothing to stop it feels naively optimistic.

Yeah primitivism is where anti-capitalism in a capitalist society ends up.

{Susie} I... am trying to wrap my head around that, and whether you're saying it's a good thing, or a bad thing. *Squeak-squish.*

Very impressive though I would have liked some way to affect the ending. Something a little funny is my initials are TK, so I thought for a sec it was pulling from a username somewhere.

i love all the lil raccoon bois

There's some really good stuff in here, but the ending is extremely heavy-handed and basically just punishes the player for playing at all. Considering TK is your player avatar, having TK be shit on for approximately 2000 words at the end is not a great way to end your game, fellas.

(music is great, though)

the screen is just grey

nvm switched to firefox and it works

Seeing the survivors brought a tear to my eye... All that hard work to destroy everthing, and some of them got away! Next time I am using nuclears so those that are not vaporized will die miserably and slowly from the radiation...

I am finishing the game and this shit is heart touching

Most of the time, i'm not a clicker game fan but this one is very pretty about the subject and art, audio is very nice too ! Congrats !

The save part is very enjoyable too

I never thought I would cry during a clicker game. Holy shit this is a masterpiece. Do yall have a way I can donate some money to yall? I’m abt to buy the album on bandcamp but I want to tip the devs as well.

As a tycoon style game must say I do LOVE THIS. Pretty cool; tho I haven't done the "endgame" yet I still had fun with the hour that I spent messing around in it.

This game is so addictive and fun! But, one small bug, is that sometimes, every single one of your raccoons works on one job. You can't change it, except if you reload the page. Nothing else is wrong. This game is SO FUN! 10/10

Great game! wondering if theres alternate endings where you as TK can end up with cool teach tho, or is death the only option?

I need this no

I played the whole game and it is such fantastic game, the characters and storyline are phenomenal! Fantastic job to everyone who made this game. 100% will play this again.

What an exceptional, wonderful game. Thank you to everyone that worked together to make this emotional roller coaster of a game.

Great game, gameplay was engaging, characters were fun, and storyline was well written :'). Thank you!

The game is really fun but there are a lot of boring long periods of time in the third act. Maybe the player should get more texts from the racoons or have some other interactive moment at every milestone (like for every bean or some randomly generated event)

Some tips to speed up that stretch significantly: Money Baby actually gives some helpful advice here. Ignoring the stocks and gambling can get you money pretty fast, as can manipulating the Finance ability. There's no financial penalty to selling shares, so buying greens at the discount and then selling them back at full price is free money. Free, ethical, consequence-free money. 🦝🤑

My favorite incremental of all time, substantially beating out A Dark Room after something like 7 years undefeated. This from someone who has played virtually every major incremental title since 2015.

Literally everything about this game is great, from the graphics to the music to the writing to the mechanics--it's like a love letter to incremental gaming, disguised as a dire warning about the pitfalls of capitalism. Or vice versa. And better yet, all the component parts work together to form a Trash Gestalt--somehow funny and clever and wise and poignant and sad.

Although the ending is an eensy bit of a copout, and Act 4 could have been a little shorter, I choose to believe that Karl Marx would be proud of this homage debris. My only regret is that there isn't an Act 6 (complete with a Comrade Racoon ecosocialist utopia). But at any rate--bravo.

My thoughts exactly! A dark Room has been my go-to for narrative clicker games for years, but this beats it out.

Absolutely amazing in every aspect. Runs smoothly, looks polished and adorable, game mechanics are fun and the story incredibly compelling.

Edit: I also laughed at MB's portrayal as a Get Rich Quick scheme boss. Hit the nail on the head with the lingo, the little texting emotes and his attitude.

made me cry. i love it

Crashed in FF after receiving an answer to the 2nd question you can ask in stonks academy (and after asking the first). Sorry, lmk if there's bugtracker.

One of the best games I've ever played.

I have a strategy for the stalk market: buy shares at a low price with E ability. With same E ability sell that same share =) it is ridiculously op. Also are their multiple endings?

I think that is one point everyone can agree on.

C.R.E.A.M cash racoons everywhere around me 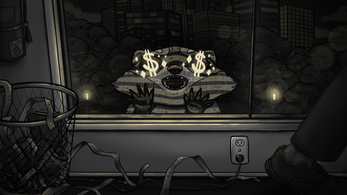 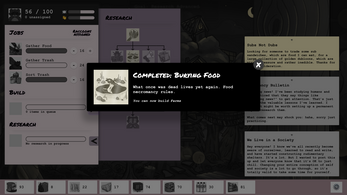 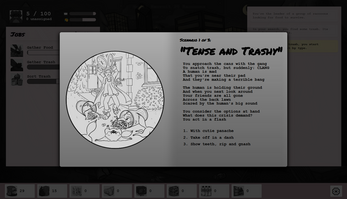 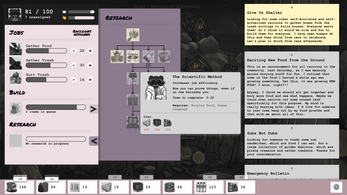